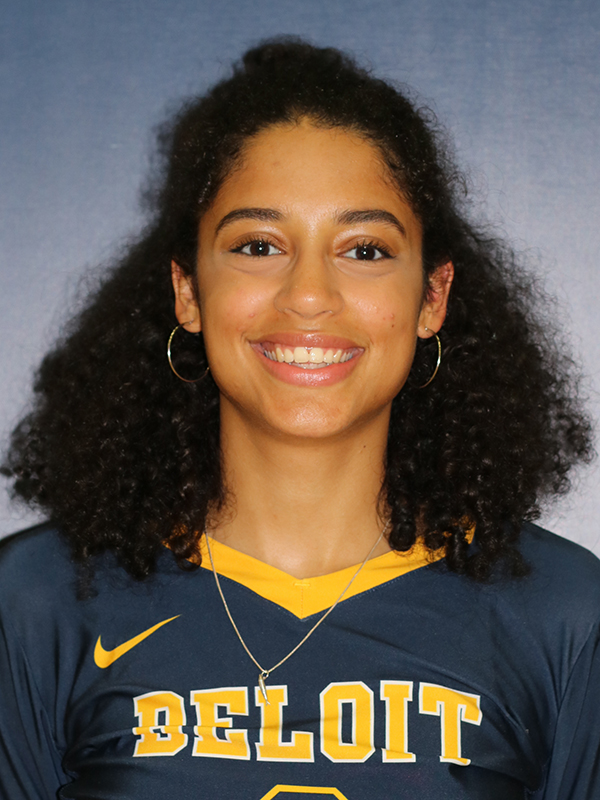 BELOIT—In a more perfect COVID-free world, Beloit College senior Eva Laun-Smith would be enjoying her final fall season of volleyball, likely adding to her impressive credentials as a powerful 5-foot-10 outside hitter.

Instead, she’s resolved to the fact that part of her career as a student-athlete may be over.

“If sports can come back in the spring, we’re not sure what it will look like,” she said. “Multi-sport athletes may have to choose between sports. I love volleyball, but I would have to choose track and field.”

The history major finds herself in the same predicament as every student-athlete on campus, taking a wait-and-see approach to sports while focusing on academics.

She recognizes that it is a strange moment in the long history of the college.

“Because I like history so much, it is really exciting for me to be involved in an historical moment like this,” she said. “It’s really sad that athletics aren’t happening, but it is exciting nonetheless.”

Laun-Smith has worked with Archivist Fred Burwell and recently was interviewed by a Rockford television station concerning the college’s 100-year history with the Midwest Conference.

“I know a decent amount of Beloit College athletic history,” Laun-Smith said. “It’s pretty amazing that the college has been affiliated with one conference for all those years. That’s really unique when you compare it to most colleges.”

To be honest, while she has provided a lot of it herself, the school’s athletic history isn’t really Laun-Smith’s main passion.

“I’ve taken a lot of Black history courses at the college,” she said. “A lot of the work Fred gave me was related to Black students on campus. He allowed me to focus in a specific field I was interested in.”

The Beloit Memorial High School graduate said Burwell, who has now retired, had a profound impact on her.

“I really enjoyed working with Fred,” Laun-Smith said. “He is my inspiration. First of all, he is literally an expert on Beloit College history. He also has a really interesting take on archival work. He always puts a lot of time and effort into whatever requests people make. He cares about people and I just want to be a good person like him.”

As an athlete, Laun-Smith already is well-established in the Beloit College record book, holding multiple records. In track and field, she is the school’s first three-time All-American. She had qualified for the NCAA Division III National Indoor Championships last March when COVID-19 forced the cancellation of the event. She was ready to compete in the 60-meter hurdles and was the No. 2-ranked long jumper.

“The fact I was at indoor nationals and it got cancelled was really disappointing,” she said.

COVID-19 also wiped out the fall seasons for the Buccaneers.

“My senior year in volleyball isn’t happening, but with COVID around I have to put it in perspective,” she said. “I don’t think I’d want to be competing, realistically, because there is so much up in the air. I know what my teammates are doing to be safe, but I can’t control other teams and what they are doing.”

MWC school presidents will meet soon to decide the fate of winter sports and of course the spring could also include the fall carryover. That’s where Laun-Smith said she may be forced to choose track over volleyball if they overlap. While she led the Bucs in kills and was second on the team in aces and digs, track is her first love.

There could be another option, though.

“The college is giving all students an extra year for free, although you would have to live on campus,” Laun-Smith said. “For me, the only reason I would do that is if I do not get accepted into the Fulbright program or the JET program (which involve international experience). If I don’t, I would pursue a minor and apply for graduate school.

“My goal is to teach abroad for a few years and when I come back I don’t know if my interests will have changed. I either want to pursue a Masters in Archival Science or maybe a Masters in education and continue teaching. But who knows? Maybe I’ll change my mind and want to go to law school.”