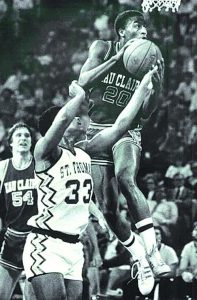 Tony Carr: learn from history and treat others how you want to be treated

Beloit athletic legend and author Tony Carr likes to not only talk about history, but show it. His collection of more than 500 pieces of Black memorabilia, including many offensive items, are painful but important reminders of the reality of racism right here in the Midwest.

He has items including stove polish and tobacco using the “N” word and items from the Ku Klux Klan. Perhaps the most jarring is the figurine of an African-American baby in the mouth of an alligator from 1930 which Carr bought in the Roscoe area.

“It can be very shocking to bring up things people don’t want to see or hear,” Carr said.

Carr hopes the shock of the memorabilia will make people truly understand the deep-rooted racism which permeated society and the ugliness to guard against today.

In an interview with the Beloit Daily News, Carr described his upbringing as a Black youngster in Beloit and how he uses his experiences to teach about the history of racism and how it shaped his and his family’s lives. Most recently he compiled his stories in the book, “Time Bring About a Change.” A frequent speaker on multicultural awareness in the Minneapolis area, Carr has conducted diversity training at one of his favorite places in Beloit, The Stateline Boys & Girls Club.

Carr was born to the late Robert Carr and Farrie Carr in Beloit and still has lots of cousins in the area. When he was age 9, in 1969, Burdge Elementary was in his neighborhood, but he had to walk to what was then a mostly white school, Royce. The district had been rezoned in response to the Civil Rights Act in 1964, which made racial discrimination in public places illegal and resulted in Supreme Court rulings forcing schools to desegregate.

“My grandfather sat me down and told me it would be OK and that I was no different than anyone else,” he said.

Going to Royce, he said, made him who he is today. The rich diversity of Beloit gave him friends of all different races and backgrounds.

Although he endured his share of racial insults as a child, Carr said he made connections with others on the basketball court. He befriended kids at the former Boys Club, now the Stateline Boys & Girls Club, where he played little league, wiffle ball, basketball and more.

“That was my safe place,” he said. “Come Saturday morning I couldn’t wait to be there and it would be there all day long.”

When asked what he thought about the club’s plans to build a new facility near Beloit Memorial High School, he joked he was a bit mad he’s not a kid anymore as it would have been close to his house in Beloit.

After honing his athletic skills at the club, Carr succeeded in high school athletics. On March 18, 1978, Carr and the Beloit Memorial Purple Knights basketball team played a nail biter versus Wisconsin Rapids. Carr sank two free-throws with two seconds remaining to secure the win, and a spot in the state championship game. Following a successful high school basketball career, Carr joined UW Eau Claire’s basketball team, becoming the university’s career scoring leader. He continued his career by earning a spot on the US Olympic Trial team and ultimately was drafted by the Milwaukee Bucks in 1982.

Today, Carr works to better the lives of others through his career at Merrick, Inc. and the American Red Cross in addition to his volunteer work.

Since the late 80s, he’s been speaking about diversity and sharing some of his shocking memorabilia in presentations to educational institutions, businesses and churches. Although people are sometimes a little too nervous to say much during the question and answer part of his presentation, he usually gets a line-up of people following the event seeking to talk to him one on one, and he always welcomes the opportunity to have dialogue about race.

When asked his thoughts on people taking down statues or other monuments which some believe represent the country’s racist past, Carr said he is torn. He said he feels uneasy about the icons or the Confederate flag. He understands they are ugly and a reminder of unspeakable acts for some African Americans. However, he also said he is intrigued as they are part of history and can be spoken about to enlighten people.

“There’s an education behind everything. It’s important to know what they represent and it might be opposite of what some believe,” he said.

If Carr came upon such a statue, he would probably incorporate it into a presentation and speak on it. He said he uses his memorabilia and other offensive symbols to motivate him.

Carr said Black Lives Matter (BLM) is an outgrowth of people getting tired of racism and standing up and speaking out. Unfortunately, he said the movement has been hijacked by other infiltrators not associated with the movement.

“BLM has its role and brought a lot of issues to light. Other grassroots groups are getting involved that are not a positive influence,” Carr said.

Carr said many people aren’t aware of the strong racism of the past prevalent in cartoons such as Bugs Bunny and Tom & Jerry and other children’s toys depicting African Americans as subservient and turning them into caricatures. Many of the items are from the not-so-distant past.

Today there is still a lack of appropriate representation of Blacks. Carr said many companies say they support Black Lives Matter, but he questions how many people of color they have on their boards or in high level positions.

“If you are going to say it, let’s live it. It’s not we want a handout, we want an opportunity to compete,” he said.

However, Carr said positive change is happening. He cited some of Proctor & Gambles commercials as being more inclusive and helping others understand stereotypes. More people of color are taking leadership roles in business and beyond and it gives him hope.

The key of progress, Carr said, boils down to what his parents taught him.

“Treat people the way you want to be treated. If we can do that we can accomplish a lot,” he said. “We really have to listen to one another and respect one another to get to the next level.”

Carr and his wife Amy live in Stillwater, Minn., and have four teenagers.